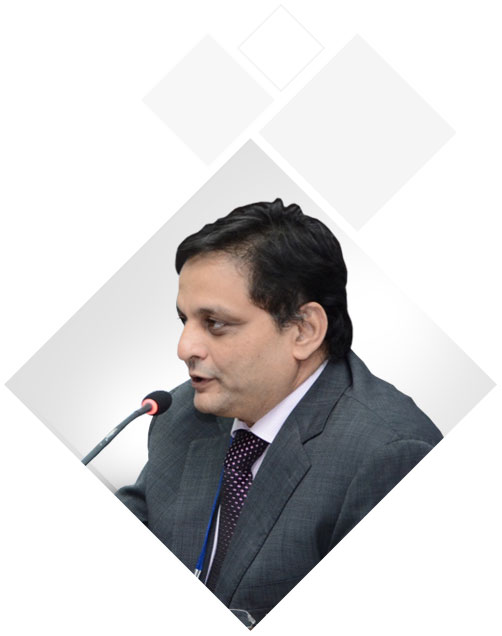 Mr. Pitre took charge of the Sushrut – Adler group operations as ‘Managing Director’ in 1987 after he graduated in commerce.He further completed a course in ‘Management for Small and Medium Enterprises’ at The Indian Institute of Management, Ahmedabad. While handling the diversified activities of Sushrut – Adler Group such as association with various foreign companies for technology transfer and implementation of manufacturing under know-how transfer, Mr. Pitre has set for himself high standards of performance to excel in the areas of strategic planning, implementation and resource management.The group has achieved noticeable milestones under Mr. Pitre’s exceptional leadership qualities and vision over the last two decades.

He is the Ex Co-Chair of the Medical Device Forum of FICCI (Federation of Indian Chambers of Commerce and Industry).

He has been a part of the Core Committee advising the Indian Regulators on evolving current Medical Device Regulations and Implementation Strategies.

He is also a member of various committees of professional organizations and government agencies such as CII Healthcare Committee, Sub-Committee for standardization of Orthopaedic Implants of the Bureau of Indian Standards (BIS), Indian Orthopaedic Association Implants Committee (IOAIC), Governing Council- Maharashtra Chamber of Commerce and Industry (MACCIA).

Mr. Pitre is one of the founder members of the Indian Medical Devices Association and a Co Opt Member of Committee of Administration of Pharmexcil.

Mr. Pitre is a member of Governing Board CMTI (Central Manufacturing Technology Institute).

In 2003, The Indian Orthopaedic Association honored him with a ‘Certificate of Excellence’ in recognition for the contributions to the Orthopaedic fraternity in India. Being an Industry spokesman, he has been invited as a speaker at prestigious forums to cover general aspects of the Orthopaedic Industry as well as the Medical Device Industry. These forums include premium Medical and Engineering institutes, Conferences by CII, FICCI, Stanford India Biodesign and government bodies such as Department of Biotechnology, Scientific Advisory Board of Health Ministry of India, Department of Pharmaceuticals. Mr. Pitre has moderated various discussions including one at the Asian Harmonization Working Party (AHWP) workshop at New Delhi. In Sept 2010, he was invited as a guest speaker in New York by Wells Fargo Securities to present his thoughts and ideas on broader Indian Medical Device market and the Indian Orthopedic Industry. Mr. Pitre was invited for a Panel discussion by World Bank to discuss ‘Opportunities and Challenges for the Medical Device Industry in India’ at The World Bank, New Delhi. Mr. Pitre was invited to speak at the ‘Orthotec Europe conference’ in Zurich on “Emerging Market Opportunities, Challenges and Key Drivers”. Mr. Pitre was invited to speak at the Office of Innovation at United Nations, Geneva on medical technology innovation to help the underserved population.

Mr. Pitre has long been convinced about the relevance of Indian Innovation in Medical Technology to the emerging non-affluent world that constitutes more than 80% of the global population. Enabling the Sushrut-Adler Group to take larger steps by becoming part of Smith & Nephew, a global orthopaedic leader, is Mr. Pitre’s most recent achievement. Post the acquisition of Adler by Smith & Nephew, Mr. Pitre till end April 2014 supported the acquired organization as its Chief Mentor. Now, as Managing Partner of Pitre Business Ventures LLP, he continues his connect with the Medical Technology Industry.

Mr. Pitre is a resident of Pune, India. As a student he was a keen sportsman and a passionate Cricketer too.